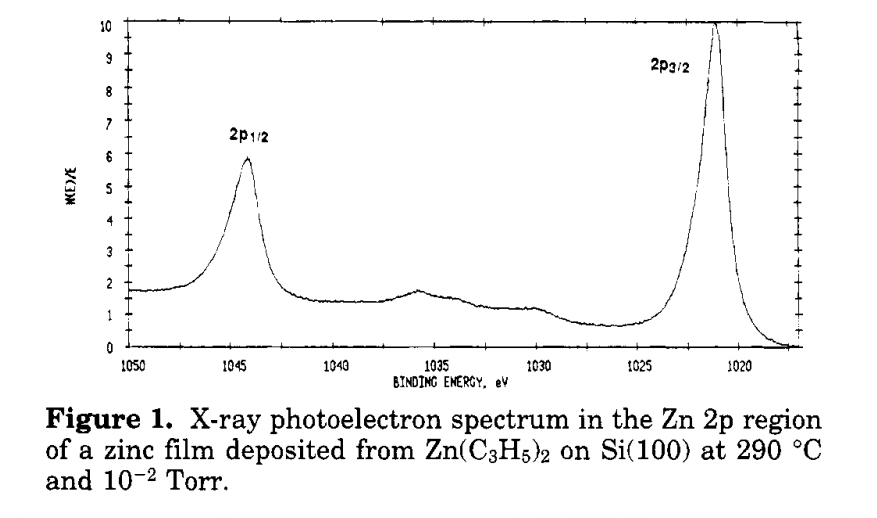 The organometallic compounds bis(allyl)zinc and bis(2-methylallyl)zinc have been shown to serve as MOCVD precursors for the deposition of zinc at temperatures as low as 150 °C. The deposits on Si(100) wafers, quartz, copper, and aluminum consist of aggregates of hexagonal plates and columns. On silicon(100) substrates and at low background pressures (10−4 Torr), the zinc crystals are oriented preferentially with their c axes perpendicular to the silicon surface. The organic byproducts generated under CVD conditions are 1,5- hexadiene (76 mol %), 2-methyl-1,4-pentadiene (14 mol %), and propene (10 mol %); except for the pentadiene product, analogous hydrocarbons in similar amounts are formed when bis(2-methylallyl)zinc is used as the precursor. In situ spectroscopic studies on single-crystal Cud (111) substrates show that bis(allyl)zinc transfers its allyl groups to the surface below 250 °C; the surface-bound allyl groups are probably bound in a trihapto fashion. On clean surfaces, the allyl groups react between 10 and 130 °C to give propene and smaller amounts of 2-methyl-1,4-pentadiene. The propene is the result of transfer of a hydrogen atom to the surface allyl groups; the source of the hydrogen atoms has been traced to the sacrificial fragmentation of some of the allyl groups. The dehydrogenation of some of the surface allyl groups also gives rise to hydrogen-deficient hydrocarbon fragments, which eventually convert to a carbonaceous overlayer. Once the overlayer is formed, fragmentation of allyl groups is inhibited and, instead, coupling of allyl groups to 1,5-hexadiene is the predominant reaction channel. Passage of a mixture of bis(2-methylallyl)zinc and bis(2-methylallyl)palladium over substrates at 250 °C and 10−2 Torr results in the deposition of Zn/Pd alloys.