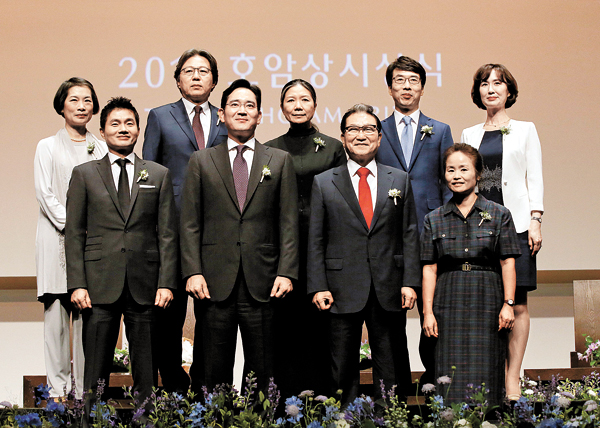 Jay Y. Lee, the son of Samsung Group Chairman Lee Kun-hee, continued to act as the key face of the conglomerate at an annual award ceremony on Monday. His appearance came after he recently tightened his grip on the company by assuming new positions and through mergers and acquisitions.

The heir-apparent, who is also vice chairman of Samsung Electronics, represented the country’s largest conglomerate at the Ho-Am Prize awards at Hoam Art Hall in central Seoul.

Until the elder Lee was hospitalized in May last year he attended the ceremony annually.

Established by the patriarch in 1990, the Ho-Am Prize recognizes talent of Korean heritage who contribute to the development of science, art, medicine and other fields.

The award ceremony is considered one of the key events for the Lee family as the chairman is known for attaching importance to it and for nurturing engineering talent.

The vice chairman’s presence at the event attracted much attention as his move to gain more power has accelerated recently.

Samsung Group announced last month that the younger Lee will replace his father as chief director of the Samsung Foundation of Culture and Samsung Life Public Welfare Foundation. The two foundations are considered important parts of Samsung’s complex shareholding structure as they hold shares in key affiliates such as Samsung Life Insurance.

The vice chairman kept a low profile at the event, refraining from giving any speeches or awarding medals.

He was also scheduled to attend a dinner banquet at Hotel Shilla that evening at which the daughters of the group’s chairman, Lee Boo-jin and Lee Seo-hyeon, and his wife, Hong Ra-hee, were to join. The three did not attend the earlier event.

This year’s winners of the Ho-Am Prize include Cheon Jin-woo, Underwood Professor of Chemistry at Yonsei University, for his pioneering role in developing nanomedicine, a field that incorporates nanomaterials and medicine.

Other winners were Kim Chang-jin, a mechanical and aerospace engineering professor at the University of California, Los Angeles, artist Kim Soo-ja, and Baek Young-shim, a nurse known for her tireless voluntary work.